There’s been so much to write about that there just hasn’t been the time or energy to blog about. Like the Saturday morning that we went to the playground. We were almost home when Littler Guy gasped and said “on no! my kids are still at the park!” And Mama laughed because when she was a girl she had a herd of imaginary kids as well. And the story is that one day on returning home from the grocery store she gasped and announced that her kids were still at the store.

The same quick thinking saved the day again. The Mama’s Dad had told her that her kids had sneaked into the way back of the car so it was all good. Well, the Mama told the Littler Guy that his kids were probably just sneaking up behind us to startle him. So he ran ahead a little ways and then ran behind us to jump out and say “boo!” – and startle his kids before they could startle him!

Or this poor baby. This is another from our Missions road trip. In the church at San Juan Mission there is a statue in the candle room. I do not know who the hero is but he had clearly vanquished his foe – and was standing with his foot on his foe’s decapitated head! Which, you might guess from the photo, was just about eye level for a 21 month old. And to say she was freaked out might be an understatement. Brother was trying to “sshhh” her (we were in church after all) but she would have none of it.

And what has these three hooligans attention? 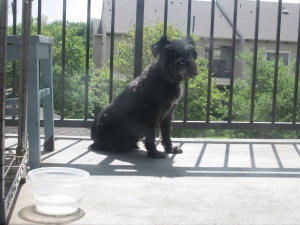 Yes, that would be the proverbial dog that followed us home. Sadly (for the boys) he was picked up and taken to the local shelter where I believe he was reunited with his humans. And they are still, more than a week later, saddened by this. Even Baby Girl who only likes dogs are a great distance (like in a book or across the street) is signing “dog” and pointing to our porch. Guess we’ll be dog people once we have the space for any pet bigger or more sensitive than a pet rock.

But perhaps best of all? Monday morning this poor mama is going to have her top wisdom teeth taken out. It doesn’t look like much blogging will be happening this week either. Prayers for a quick and easy recovery would be greatly appreciated!

A mama looking for a little piece of peace in her day.
View all posts by *kate →
This entry was posted in adventure, boys. Bookmark the permalink.

3 Responses to So much